This is different from the question of how far aerosols travel outside the body. It is looking at how far into the body aerosols can travel. 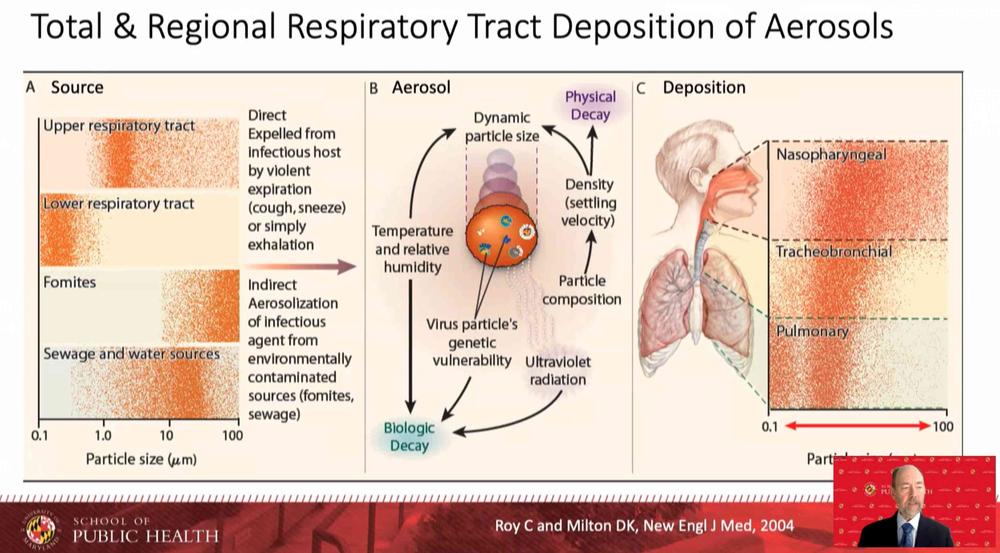 The left hand side shows the distribution of particle sizes from different sources and the right side shows where particles of different sizes will deposit.

The terms isotropic and anisotropic are used to distinguish cases where the disease has the same or different clinical outcomes depending on the mode of transmission. The deposition location matters because binding and infection is dependent on the cell on which the viral-laden aerosol particle lands (the ACE2 receptors).

Cones or bags were used to collect aerosols and modern devices such as the Gesundheight-II dynamically collect bioaerosols. Coarse particles (>5 microns) are collected on a Teflon substrate, and fine particles (0.05-5 microns) are collected using phosphate buffer with BSA (bovine serum albumin). Test subjects receipt the alphabet and the number of times they sneeze is counted.

Testing with this system showed that coughing was unrelated to nasopharyngeal aerosol generation. Generation of coarse aerosols showed a weak correlation with coughing, and there was a strong correlation between coughing and fine aerosol generation based on RNA copies per sample. Important to note that over a million viral copies were seen from someone with 0 coughs. Additional, it was possible to culture the virus from the aerosols of some of the people who were not coughing.

Do we need a randomized controlled transmission study?

A group did this in 2013 with Influenza virus and it was a huge undertaking. In the study that was conducted with poor (but not terrible) ventilation and it was not possible to detect the virus in the air when using equipment that effectively detected viruses in the air elsewhere quite easily. The Gesundheit-II machine confirmed minimal aerosol shedding. Following this (with 4 days of exposure time among cohabitating subjects), they only transmitted from 42 infected donors to 75 recepients a single infection. That person was asymptomatic and later developed immunity. This study would indicate that without an aerosol component, little transmission occurs.

After 102 years, we do not fully understand how influenza is transmitted so we need to be very careful in making assumptions about how a virus we have only observed for 8 months is transmitted.

Next: Transport of Droplets and Aerosols in Respiratory Activities (10/36)

Donald K. Milton is a Professor of Environmental and Occupational Health at the University of Maryland School of Public Health. He is a Diplomat of the American Boards of Internal and Preventive (Occupational) Medicine and a Fellow of the International Society for Indoor Air Quality and Climate. He has served on the editorial boards of Applied Environmental Microbiology, Indoor Air, and BMC Public Health, on the NIOSH NORA Indoor Environment Team, and chaired the ACGIH Bioaerosols Committee. Dr. Milton’s research focuses on infectious disease aerobiology and exhaled breath. His work lead to the recognition that influenza patients can shed infectious virus into aerosols without coughing and that surgical mask worn by infected cases can reduce the aerosol release of influenza and seasonal coronaviruses. Dr. Milton earned a B.S. in Chemistry from the University of Maryland Baltimore County, an M.D. from Johns Hopkins, and a Dr.P.H. (Environmental Health) from Harvard School of Public Health.