Is SARS-CoV-2 Airborne? Size and culturability of human-generated SARS-CoV-2 aersol (13/36)

University of of Nebraska Medical Center

Is SARS-CoV-2 Airborne? It's complicated.

This talk will look into the size of the particles that are infectious and this drives whether we determine transmission to be from an aerosol or from a large ballistic droplet. We know SARS-CoV-2 is a respiratory disease, so we know the virus is produced in the respiratory tract. We also know that aerosol produced in the lung and larynx are small (less then 1 micron to a few microns), and are produced by breathing and talking. We also know that asymptomatic and presymptomatic people can transmit the virus. Various superspreading events and data showing the impact of masks has led to a growing consensus of the importance of airborne transmission in the COVID-19 pandemic.

Early studies of SARS-CoV-2 were often looking at infected individuals in healthcare settings. Several studies indicated widespread air and surface contamination in rooms housing COVID-19 patients. Even without measuing aerosols directly, the virus was detected in HVAC outlet fans. Although this indicated fine aerosols may play a role, convincing data around culturability was elusive.

Two pre-print studies indicate that aerosol particles generated by patients can replciate in cell culture. Serial PCR and EM showed replication of collected sub-micron particles. One of the studies was able to collect viable virus at a distance of 4.8m, indicating it was from an aerosol rather than a ballistic particle. Image of SARS-CoV-2 in culture from a sub-micron particle collected from a room with two ill individuals: 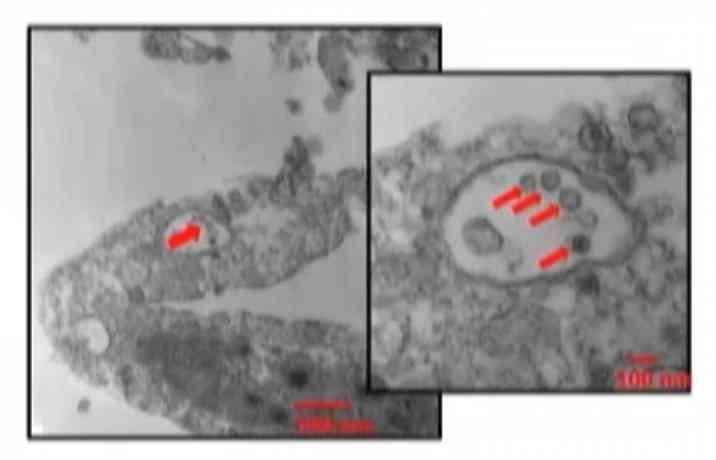 Studies in ferrets have indicated indirect air transmission of SARS-CoV-2 is possible. The small separation distance makes it difficult to completely rule out the role of larger particles. 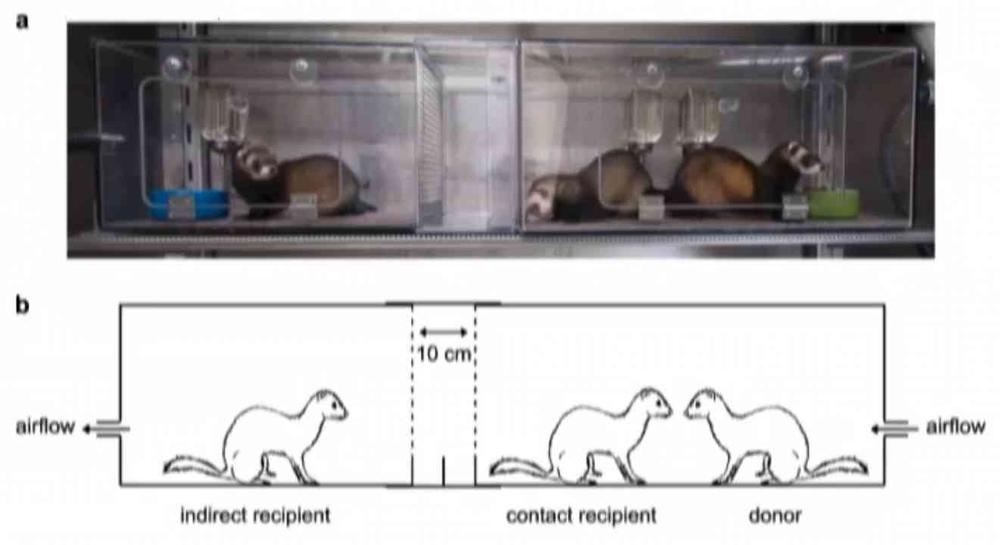 So, what do we know?

Humans infected with SARS-CoV-2 can produce infectious fine mode particles that may be able to transmit the disease after exposure to enough particles.

Questions we need to answer:

Next: Impact of environmental conditions on the infectivity of SARS-CoV-2 in aerosols (14/36)

Previous: What Size Droplets/Aerosols Are Generated by People and How Do They Spread in Air? CQ1 Panel (11/36)

Joshua L. Santarpia is the Research Director for Counter WMD programs at the National Strategic Research Institute, Associate Professor of Microbiology and Pathology, and Program Director for Biodefense and Health Security Degree Program at the University of Nebraska Medical Center. He has held past positions at the Edgewood Chemical and Biological Center, the Johns Hopkins University Applied Physics Laboratory, and was most recently a distinguished staff member at the Sandia National Laboratories. His work is generally in the field of aerobiology, the study of airborne microorganisms. He has worked extensively on RDT&E and OT&E efforts for biological sensors for both DoD and DHS. He has developed building and facility sensing networks for biological detection in numerous facilities. He has developed aerosol measurement tools, including those for unmanned aerial vehicles and for biodetection/collection activities. He has worked extensively to understand optical and other signatures that can be used to detect and identify biological aerosol and studied how those signatures change over time. He has developed novel methods to study bioaerosol hazard in medical environments, and studies for private companies to determine potential aerosol hazards of medical devices in operating rooms. Dr. Santarpia is trained in aerosol physics, atmospheric chemistry and microbiology. His peer reviewed research focuses largely on the fate biological aerosols in the atmosphere, detection of biological aerosols and atmospheric chemistry of biological and anthropogenic particles. He has contributed to several books on the characterization and measurement of biological aerosols in the environment.