Building on prior talks this one is focused on dicussion on the mode(s) of transmission, challenges in understanding transmission, and critical questions for developing policy and practices.

Some features of the tranmsission SARS-CoV-2

Droplets are projectiles limited by gravity, whereas airborne transmission is not. Airborne is defined in this talk as infectious droplet nuclei that remain airborne for minutes to hours and can spread via HVAC or other air currents. Social distancing of 6 ft is only effective in addressing the droplet spread. Droplet and airborne should not be considered as necessarily exclusive. Some pathogens are exclusively aerosol (e.g. tuberculosis), primarily aerosol (e.g. smallpox, anthrax), or opportunistic, where aerosol transmission occurs under favorable conditions (e.g. SARS outbreak, Amoy Gardens apartment complex, 2003). Extensive evaluation at the apartment building failed to find a smoking gun, but it was speculated that aerosol may have been the primary transmission mechanism.

Person-to-person transmission of infectious diseases is multi-modal, based on number of people one is exposed to, proximity, cumulative time of exposure, protective measures, and environmental factors (e.g. airflow characteristics such as temperature or humidity).

Households and crowded facilities have higher risks than passing interactions, but there may be other factors such as lower temperatures in work environments that may facilitate transmission since SARS-CoV-2 is viable for a longer time at cooler temperatures. Since re-opening clusters of infections have been linked to bars and it is speculated that mask-removal while eating and drinking may play a role.

SARS-CoV-2 infectiousness exists prior to symptoms and this is the time when the infection risk is highest, whereas SARS-CoV-1 had highest transmission risk at the peak of symptoms.

Choir: 61 persons attending a 2.5 hr choir practice in Skagit County, WA on March 10 led to 53 people developing symptoms (overall attack rate of 87%), which led to 3 hospitalizations and 2 deaths. This event does not prove airborne transmission, but it raises the question of the risk of aerosol transmission from activities such as singing.

A preprint publication evaluated the aerosolize particles produced by wind instruments comapred to speaking and breathing. The trumpet showed by far the highest risk, followed by the oboe, and then bass trombone, all of which produce more aerosols than speaking.

Restaurant in Guangzhou, China: Family A arrived from Wuhan area on Jan 23 and had lunch on at a restaurant. 3 members of two families seated at adjacent tables developed confirmed SARS-CoV-2 infections at a time when only ~10 cases had been confirmed in Guangzhou.

A preprint study showed the ventilation problems that may have led to this transmission, and several factors were highlighted: 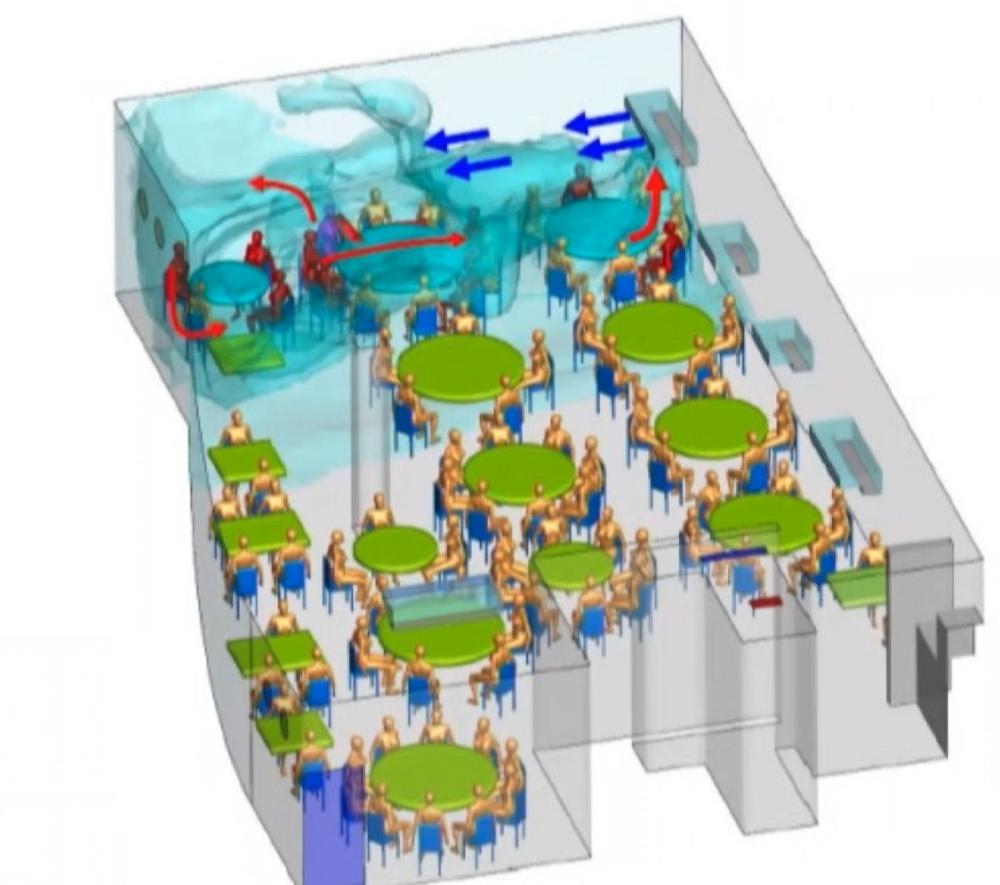 The authors described the room as poorly ventilated.

Q: What is the point for action and how much evidence is needed to take precautionary action against the aerosol transmission risk?

A: Comes down to what is reasonable from a perspective of risks and benefits of the different prevention methods. Despite the precuationary principle, we don't say that no one should drive a car because seatbelts do not eradicate injuries and deaths from car accidents so we should put the data together in way that allows us to develop reasonable and actionable guidelines. The hope is that these sessions could help generate that.

Q: Question about particular environments. Dental offices, school, public transport, etc. How much data is needed for each particular micro-environment? How do you approach that problem and should there be more focused research or should we try to generalize from one environment to another?

A: From a scientific perspective, we always want more data as quickly as possible, including taking into account the secondary effects of any intervention. There is not enough data yet and we need to continue focusing on this area. It is worthwhile to prioritize the areas that have the largest effect on the ability to resume economic activity since negative economic effects become a tertiary factor impacting health. Schools are considered critically important because the closure of schools can prevent parents from returning to work.

Next: Aerosols and Transmission of Respiratory Viruses 101 (6/36)

Jay C. Butler is the Deputy Director for Infectious Diseases at the Centers for Disease Control and Prevention. In this capacity, he provides leadership to the efforts of CDC’s three infectious disease national centers and helps to advance the agency’s cross-cutting infectious disease priorities. Dr. Butler has 30 years of experience in increasingly complex public health leadership and management positions. He is board certified in medicine, pediatrics and infectious diseases, and has served in public health positions at federal, state, and tribal government, including completing more than 22 years in the Commissioned Corps of the US Public Health Service, from which he retired at the level of Captain (Medical Director) in 2012. From 1998-2005, Dr. Butler was Director of the Arctic Investigations Program and from June 2009 to March 2010 he directed CDC’s 2009 H1N1 Pandemic Vaccine Task Force, which achieved emergency vaccination of more than 80 million Americans. Dr. Butler made critical contributions to emerging infections, including serving on the Hantavirus Task Force in CDC’s Viral Special Pathogens in 1993 and 1994. He held leadership roles in multiple emergency responses, including CDC’s response to bioterrorist anthrax in 2001. Dr. Butler has also held multiple leadership roles in Alaska, including Chief Medical Officer for the Alaska Department of Health and Social Services (2014-2018 and 2007-2009), State Epidemiologist (2005-2007), and Senior Director of the Division of Community Health Services for the Alaska Native Tribal Health Consortium (ANTHC)(2010-2014). He was President of the Association of State and Territorial Health Officials in 2016-2017, and has made important contributions to public health approaches to reducing harms associated with addiction. After completing CDC’s Epidemic Intelligence Service in the Wisconsin Division of Health, Dr. Butler completed a preventive medicine residency with the Respiratory Diseases Branch in the National Center for Infectious Diseases, and an infectious disease fellowship at Emory University. He graduated from North Carolina State University with a BS in zoology, received his MD at the University of North Carolina, and did internship and residency training in medicine and pediatrics at Vanderbilt.