1. The “fomite” path, through touching a surface that contains the SARS-CoV-2 virus, such as a light switch, a door handle, or someone else’s hand. That can transfer the virus onto your hand, and then you can infect yourself by touching your mouth, nostrils, or eyes.

2. The “large droplet” or “ballistic droplet” path. Droplets are particles of saliva or respiratory fluid (larger than about 100 μm, with 1 μm = a millionth of a meter) that are expelled from infected individuals when coughing, sneezing, and to a lesser extent, talking. They fly ballistically (like a projectile) through the air, as in the famous “angry birds” video game. They infect by impacting on the mouth, nostrils, or eyes. They are the light blue ballistic droplets in the figure below. If they don’t hit someone, they fall to the ground in 1-2 m (3-6 ft).

3. The “aerosol” path. Aerosols are also particles of saliva or respiratory fluid, but they are smaller than about 100 μm. For this reason they can linger more in the air, from tens of seconds to hours, and can travel longer distances. They infect by being inhaled through the nose or mouth, or (less likely) by deposition on the eyes. Depending on their size, they stay longer / travel further in the air, and they also reach different parts of the human respiratory tract. These are the green, yellow, and red dots in the figure below. 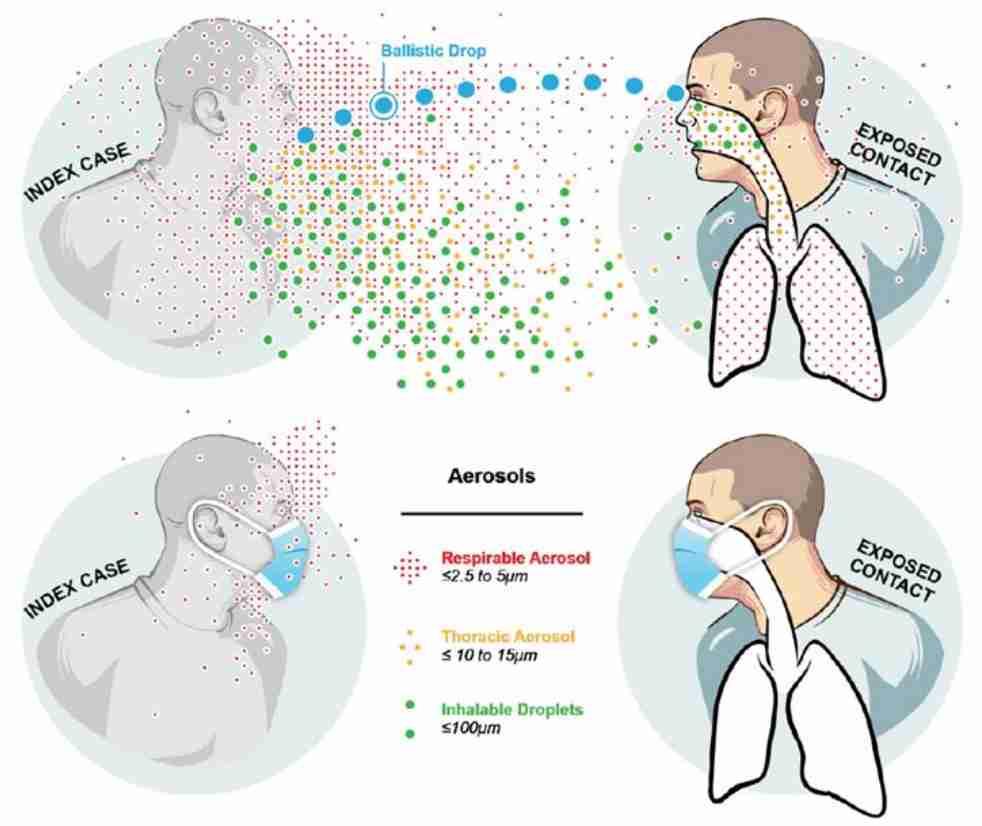 Figure: schematic representation of the droplet (blue) and aerosol (green, yellow, and red) infection pathways for a respiratory disease. Both travel through the air from the infected person to the susceptible person, but ballistic droplets infect by impact, and aerosols infect by inhalation. From Milton (2020).

1.2. What is the relative importance of the routes of transmission?

This is currently controversial. We also have to note that the relative importance will vary with people’s behavior, whether they wear masks and how well fit, whether they go indoors a lot or a little, whether they wash their hands often or not, etc. It will also vary with the setting. 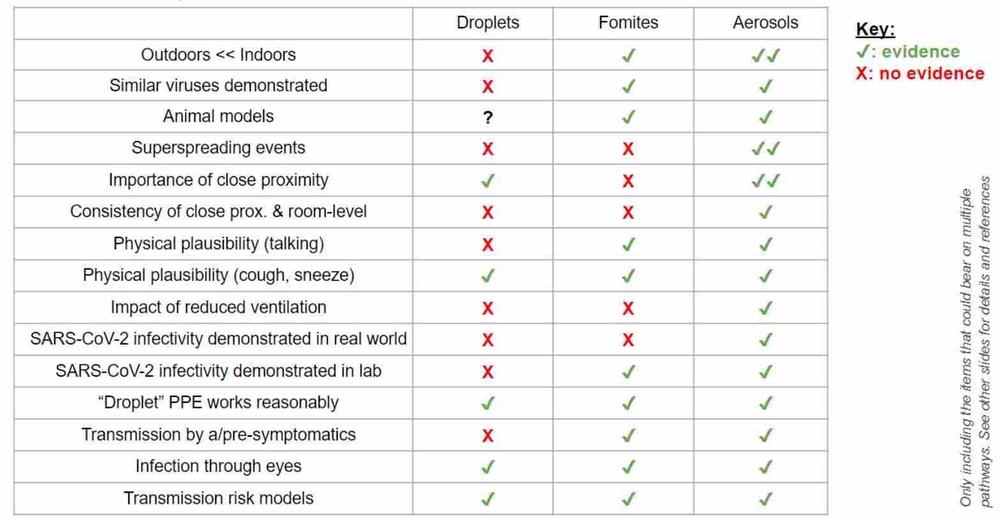 1.3. But if COVID-19 was transmitted through aerosols, wouldn’t it be highly transmissible like measles, and have a very high R0 and long range transmission?

In a word, no. This is a myth. Here some people are confusing an artifact of history with a law of nature. There is no reason that nature can only produce highly transmissible aerosol-transmitted diseases. It was the entrenched resistance against aerosol transmission initiated in 1910 by Chapin's book on The sources and modes of infection that led to only highly transmissible viral diseases being accepted as being transmitted through aerosols, because only for those the evidence was too obvious to be denied (plus tuberculosis, which is less transmissible, due to some amazing experiments). Other diseases such as the flu, SARS, or MERS also have an aerosol transmission component, but the lack of acceptance of that fact has deprived the medical community of accepted examples of less transmissible aerosol diseases.

Also note that Rt for SARS-CoV-2 is very high for superspreading events, which can only be explained by aerosols. This is easily explained by aerosol transmission, depending on whether infected people participate in situations conducive to superspreading, and with variable emission of viable viruses in time and among people. This leads to a very skewed distribution of R, with many low values, and some very high values.

In addition, measles and tuberculosis were thought to spread by droplet / fomites for decades. For example this article on measles from 1985 states "Most public health authorities believe that the primary mode of transmission is by large respiratory droplets" and that it "requires close contact." But there were suspicious patterns, e.g. tuberculosis outbreaks occurred in ships, buses, poorly ventilated rooms, and bars (does that sound familiar?). It was later demonstrated that tuberculosis can only be transmitted through aerosols, and that measles is very efficiently transmitted through aerosols. The lesson that we should learn from this history is that it is very difficult to determine the mode of transmission of a respiratory disease, and that often in the past an observation of efficient infection at close proximity (and that social distance works to reduce infection) has been incorrectly interpreted as evidence for droplet and against aerosols. In reality transmission in close proximity is actually strong evidence of aerosol transmission, especially in the absence of cough (which is very relevant to COVID-19 where people where no or few symptoms spread the disease efficiently).

1.4 Are all infected people equally contagious?

Not at all. First of all, it is very clear that there is a large variability in time for a given person. It is very well known that there is a peak of contagiousness just before and at the onset of symptoms, and that then contagiousness decreases (figure below). By the time most people are sick enough to go to the hospital, many are not contagious. In addition, even for infected individuals virus emission is not constant, but it is rather an sporadic event. Unfortunately a lot of data is interpreted as if contagiousness was constant during the disease, even by key experts on WHO’s own committee. This leads to a lot of misinterpretation and confusion. 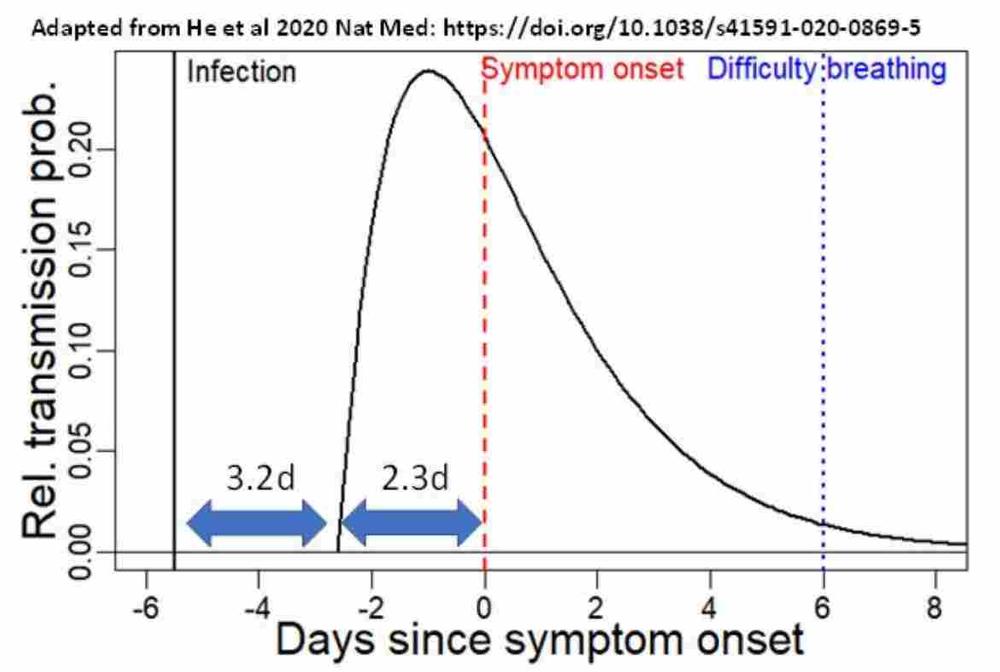 Figure: relative probability of transmission of SARS-CoV-2 from an infected individual as a function of time in the disease. The peak of infectiveness is just before the onset of symptoms. Reference: Prof. A Marm Kilpatrick, University of California-Santa Cruz.

In addition, it is likely that some individuals are more contagious than others. This can be due e.g. to higher viral load at the onset of symptoms, to higher emissions of respiratory particles, or (likely) to both. It is known that some people exhale 10 times more aerosols when speaking, although the reason is not understood. This variability likely helps explain the high dispersion in R (many people don’t transmit the disease to anyone, but a few lead to superspreading events) and the relatively low attack rate in households. I.e. some infected people don’t exhale much virus, while others exhale a lot for a few days.

1.5. So should I keep washing my hands and being careful about elevator buttons, light switches, door knobs etc?

Yes! While we think that aerosol transmission is more important than this “touching” (fomite) route, there is evidence that the virus can be transmitted in this way. So you should keep washing your hands, using hand sanitizer etc. But you should pay at least as much attention to the air you breathe as you do to sanitizing surfaces and your hands.

1.6 Where can I find more scientific information at a higher level about aerosol transmission?

A great source is the 11 hr recording of the recent Workshop on Airborne Transmission of SARS-CoV-2 from US National Academies of Science, Engineering, and Medicine (the highest level scientific body in the US). The workshop was co-organized by two of the writers of these FAQs (K. Prather, L. Marr), and two others spoke in it as well (S. Miller, C. Haas).

Next: 2. General questions about aerosol transmission

Previous: 0. Questions about these FAQs

See our other articles or take a look at our research paper summaries.

Published with authorization to use copy "as you see fit" with attribution as specified. https://tinyurl.com/FAQ-aerosols, Version: 1.60, 14-Sep-2020