Exposure to expired infectious aerosols in proximity and distance (20/36)

Department of Mechanical Engineering / School of Public Health, The University of Hong Kong

Students were observed touching their own hair, face, neck, and shoulders 10% of the time, mostly with their non-dominant hand. 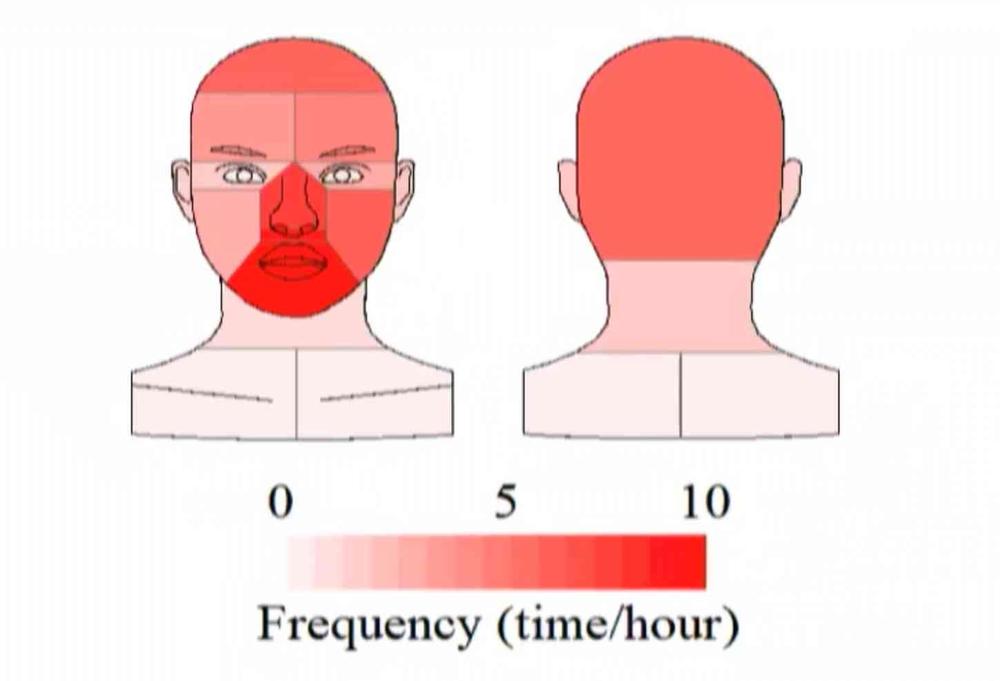 In the exhaled air stream, larger droplets will settle, but the leading vortex may play a role in keeping small particle airborne. 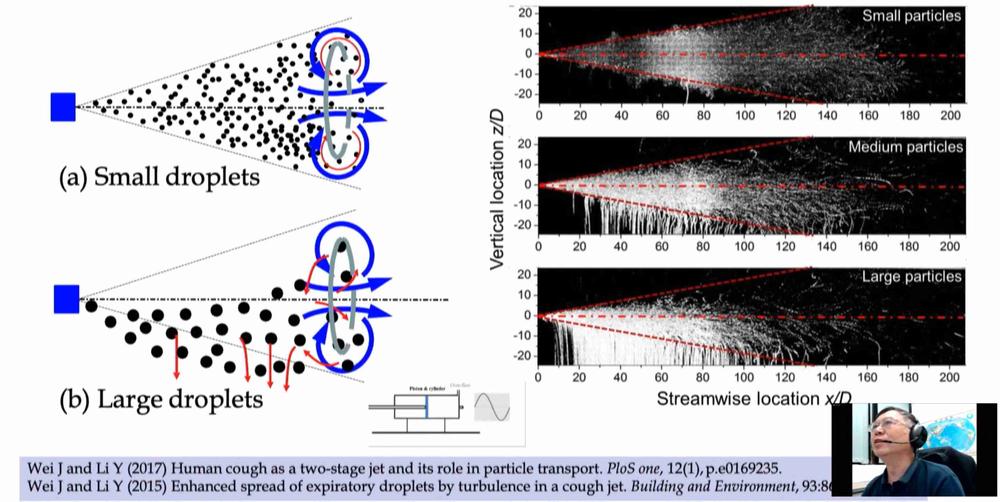 Turbulence is also important. The red dot shown in the middle on the right hand is idealized and turbulence will result in it being more scattered. 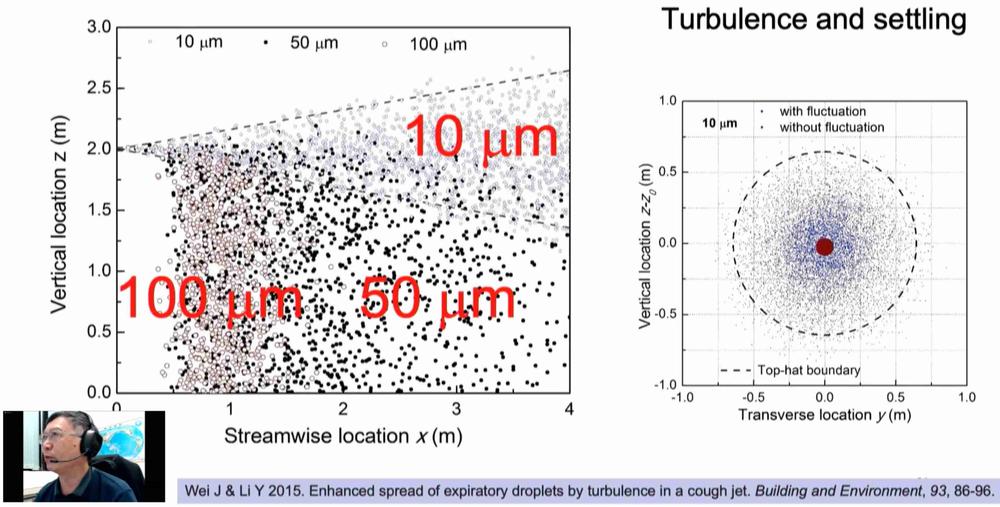 What are the (large) droplet sizes that actually deposit on your face? A large enough droplet will deposit, but a smaller one is more likely to flow around your face. The threshold for this is 50-100 microns, not the 5 or 10 microns, which is sometimes stated. This threshold is based on the droplet Stokes numbers, which determines its deposition efficiency on a sphere. 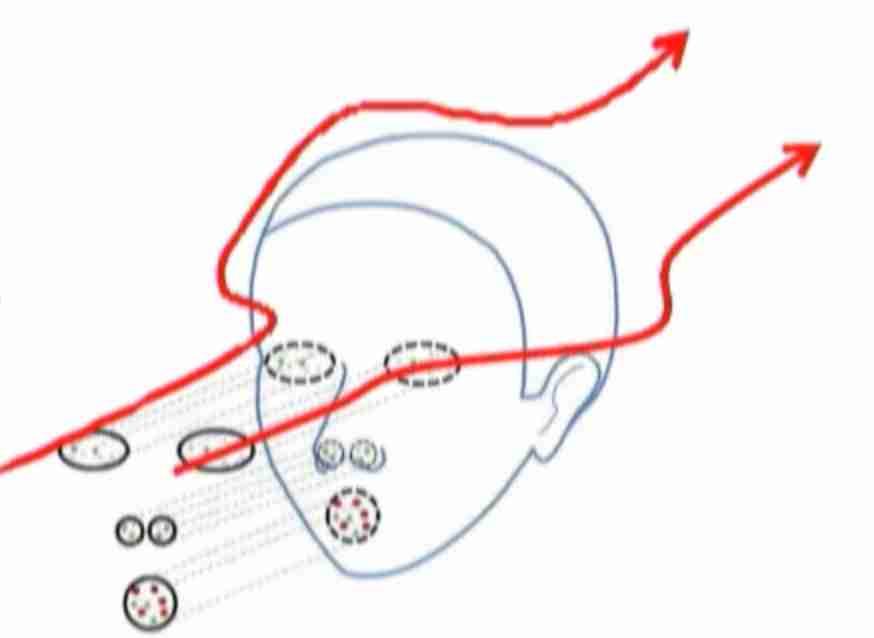 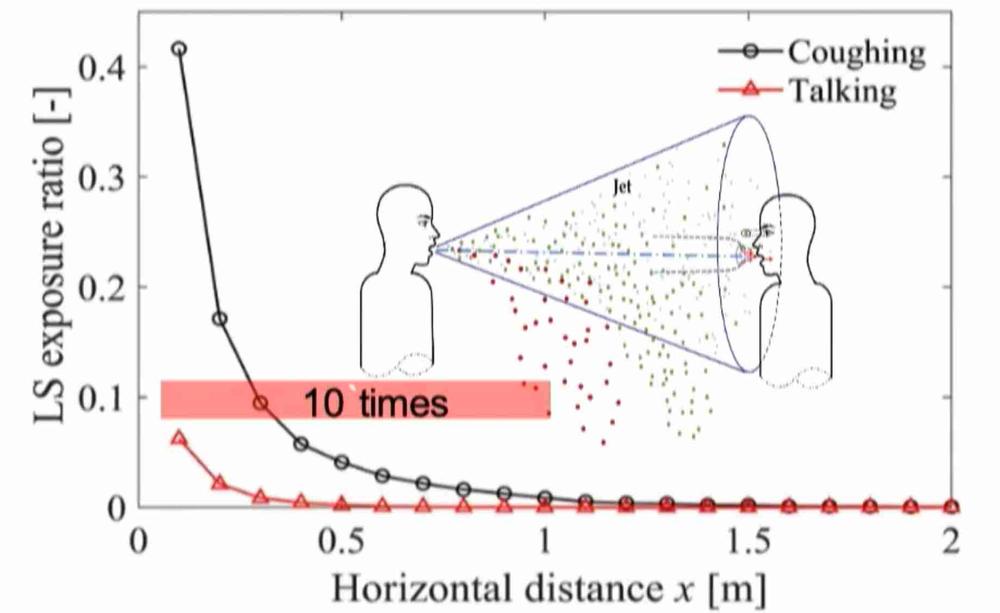 Short range airborne transmission has been ignored for a long time. We know that when two people in close proximity exhale a tracer gas, the concentration is much higher at close distances. At a distance of 1 to 2 meters away, you reach a plateau representing the average concentration in the room.

If you had 2 people sitting back-to-back there would be no exposure. Not being face to face can change exposure levels, and people also frequently move their head in different directions. So the actual dispersion is in multiple directions as opposed to the narrow jet model.

We can model the probability of infection as:

I = number of infectors

The room air conditions can also play a large role since stratified layers of air allow the respiratory plume to travel farther. [our note: the Reflow Labs Airsafe was designed with this in mind to break up these layers, rather than delivering clean air randomly] 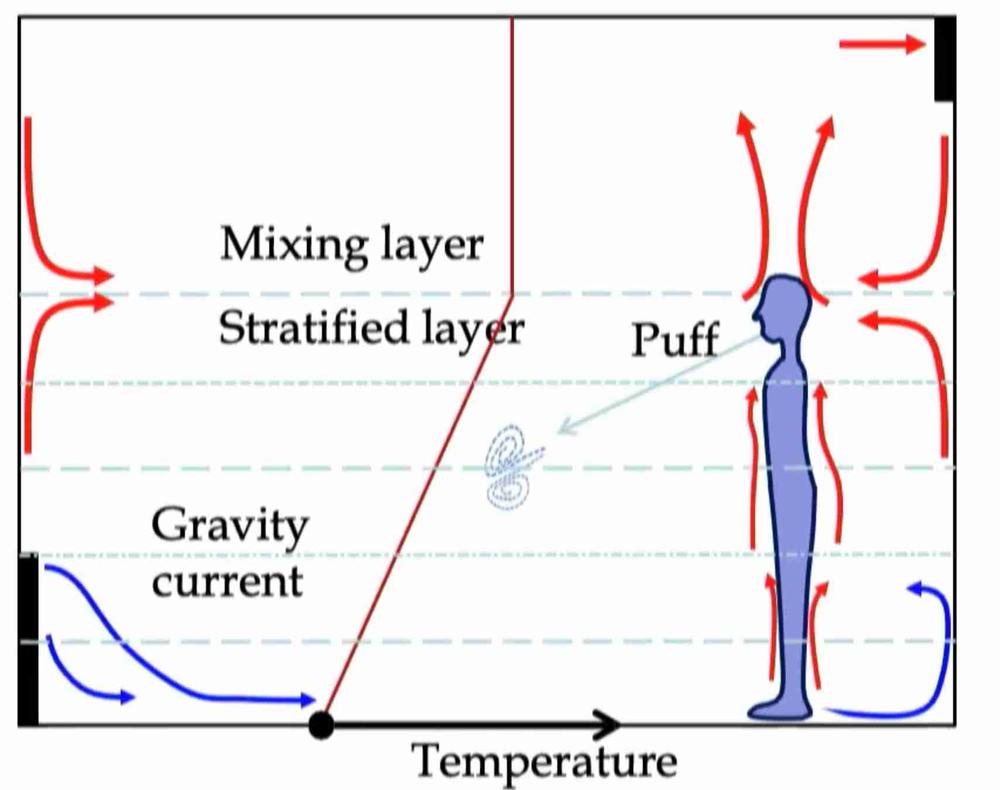 For the fomite surface transmission route we have scale-free logistic growth where one hand can touch multiple surfaces and each surface can be touched by multiple hands. It is important to note that hand hygiene and surface hygiene need to be used together, rather than just hand hygiene.

Should our transmission route concepts be more transfer-focused?

Previous: Which size particles are infectious and for how long? CQ2 Panel (16/36)

Yuguo Li is Chair Professor of Building Environment at Department of Mechanical Engineering and Honorary Professor of School of Public Health at the University of Hong Kong. His main research interests are on indoor air quality, city climate, and environment studies of infection. He currently serves as Editor-in-chief of Indoor Air. Since 2003, he has been studying the mechanisms of transmission by airborne and fomite routes for respiratory and enteric infection. Dr. Li received his PhD from the Royal Institute of Technology (Sweden) in Fluid Mechanics.