Aerosols and Transmission of Respiratory Viruses 101 (6/36)

Intended to provide background for the more detailed talks. Key topics: 1) transmission routes; 2) importance of size; 3) journey of viruses through the air (emission, transportation, and deposition); 4) evidence for SARS-CoV-2.

There are four main transmission routes of respiratory illnesses:

Origins of 5 micron cutoff are unclear since it is attributed to a paper by Wells in the 1950s, but he pointed to a cutoff closer to 100 microns. The 5 micron cutoff is not supported by modern aerosol science and might be related to thoughts about which particles can reach the lungs.

Airborne terminology is not constant across different fields and public perception. Whereas the WHO considers airborne as something that can spread like Measles, both aerosol scientists and the public define it as anything suspended in the air. Aerosols are solid or liquid particles suspended in gas, which WHO defines as <5 microns. Droplets, are liquid particles, defined by WHO as >5 micron, which can be blocked by a surgical mask. Droplet nuclei might be a cloud condensation and is considered by WHO to be a the residue of a droplet that has evaporated to <5 microns. A particle is considered a virion by WHO and particulate matter to aerosol scientists.

Suggested re-defining based on transmission mechanism: Large Droplets are sprayed onto the body, a form of contact transmission; Aerosols are inhaled into the respiratory system. Establishing these definitions helps to determine control strategies, infectious dose, and disease severity. The physics based cutoff is in the 60-100 micron range.

Studies can show whether a transmission occurs, but do not establish the route. In close contact, all mechanism are present so it can be challenging to say definitively, which are responsible. Talking at a bit of a distance results in 100x more aerosol generation than large droplets. Whereas a droplet would have to hit the mouth, nostrils, or eyes, at a close distance there is a much higher concentration of aerosols than anywhere else and those will certainly be inhaled. After spacing of just 0.5m, the aerosol transmission route from coughing dominates and the large droplet risk quickly diminishes as spacing increases compared to aerosols. With talking, droplets are only as important as aerosols at around 20 cm spacing, and quickly become irrelevant. 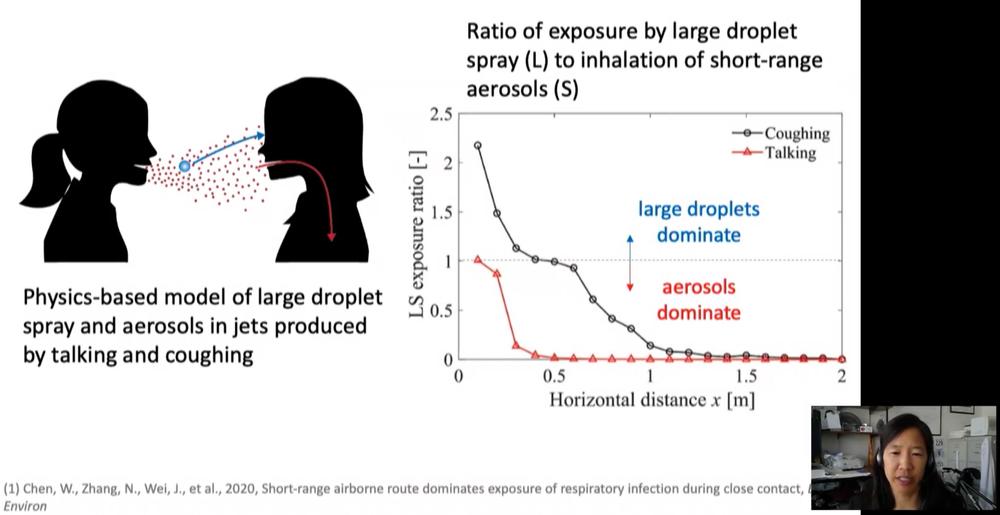 The respiratory plume of aerosols not only stay elevated for extended period of times, but after falling to the ground, they can be re-suspended into the air. The mere act of walking around re-suspends around half the aerosol load -- this is known as the pig-pen effect. Therefore, transmission from aerosols can occur at short and long ranges. 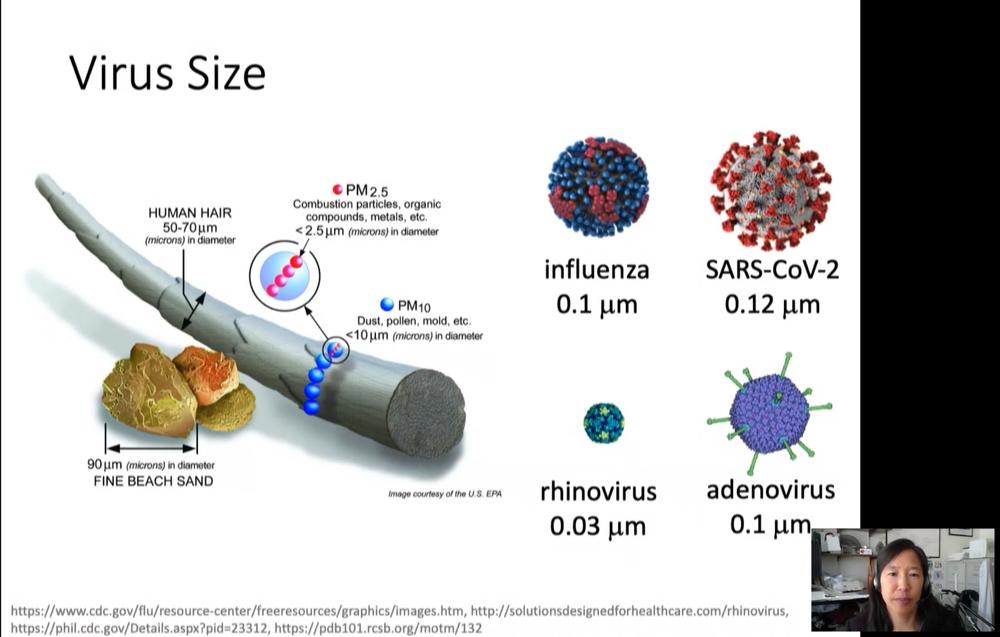 The size of the particles with the carrier fluids determines the key attributes that we care about:

Variations between viruses have to do with the viral load present in the aerosols, inactivation rates of different viruses, and the infectivity requirements of the different viruses, including load and location (e.g. tuberculosis needs to enter deeply into the lungs). 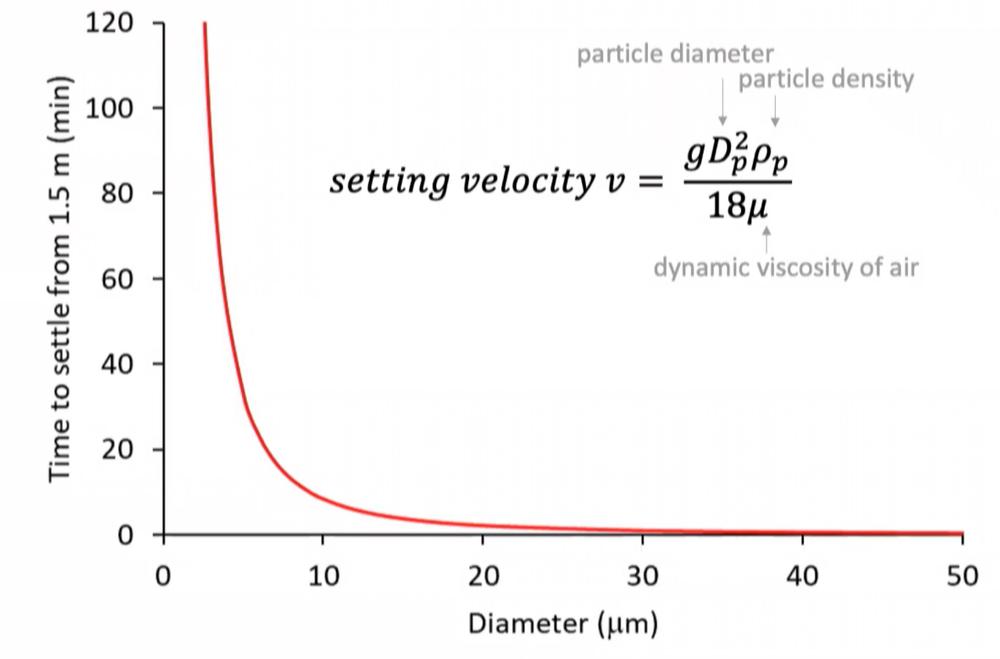 We know how long aerosols stay in the air. Droplets/aerosols around 5 microns require 30 minutes to settle. With a low indoor air velocity of only 5 cm/s, a 5 micron particle released from a 1.5m can travel 100 meters. Only at a size of 30 microns will the horizontal travel not exceed 2 meters. When the air velocity is higher (20 cm/s), these values are 4x higher and a 30 micron droplet can travel 7-8m. 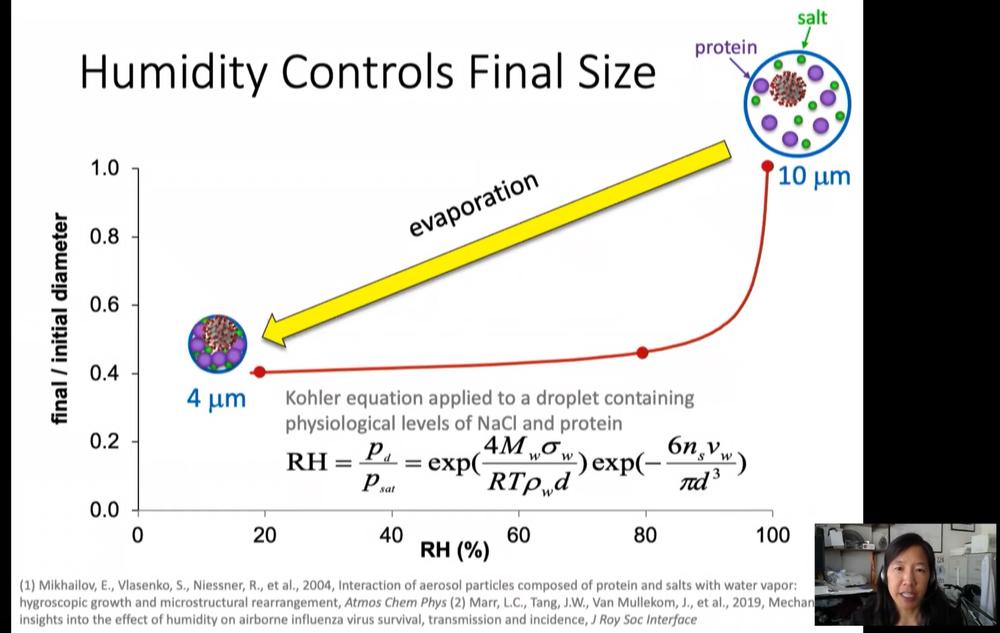 How do these aerosols get into the air in the first place?

Coughing with influenza generates aerosols in the 0.3-8 micron size range. Note that there is large variability in the amount of aerosols produced by different people.

What happens to the aerosols once they are in the air?

There are three things that lead to virus removal: settling, ventilation, and inactivation.

A mass balance model then indicates the dynamics of the viruses in air over time.

What happens if we breathe in these aerosols?

The efficiency with which particles can settle into different portions of the respiratory pathway is determined by their size. Only the >0.1 micron region is relevant for us. It is worth noting that the 0.3 micron range that people are concerned about with n95 masks is where deposition efficiency is at its lowest. After deposition, the dose-response curve determines infection.

What do we know about SARS-CoV-2 Aerosols?

Though a prior speaker from the CDC claimed that phylogenetic similarity to SARS and MERS outbreaks is not sufficient to determine that it is airborne, it is noted from those events that "fear of panic and political blame led to the reluctance of various health authorities in admitting airborne spread of SARS in the community".

Viruses can be detected based on measuring RNA, but this does not confirm infectivity, which requires culturing.

Aerosol distributions in two Wuhan hospitals show a large amount of viral copies in aerosols below 2.5 microns. Hospital rooms in Singapore and Nebraska both found RNA viral copy levels in the thousands per cubic meter at a size above 1 micron. Infectious SARS-CoV-2 aerosols were found recently at distances greater than 2 meters and were reported in a preprint.

The half-life of SARS-CoV-2 was found to be 1.1 hours at 65% RH (similar to SARS-CoV-1) and a group that looked at this experimentally found that the virus survives for 16 hours at 53% RH.

Many outbreaks implicate, but do not prove aerosol transmission. Another superspreader event was a Korean call center (crowded, lots of talking, poor ventilation, no masks). Of note, most of the cases were on one side of the soom, indicating that it was likely due to the shared air since there was plenty of direct contact outside of this cluster. It is hard to explain these outbreaks by any mechanism other than aerosols. 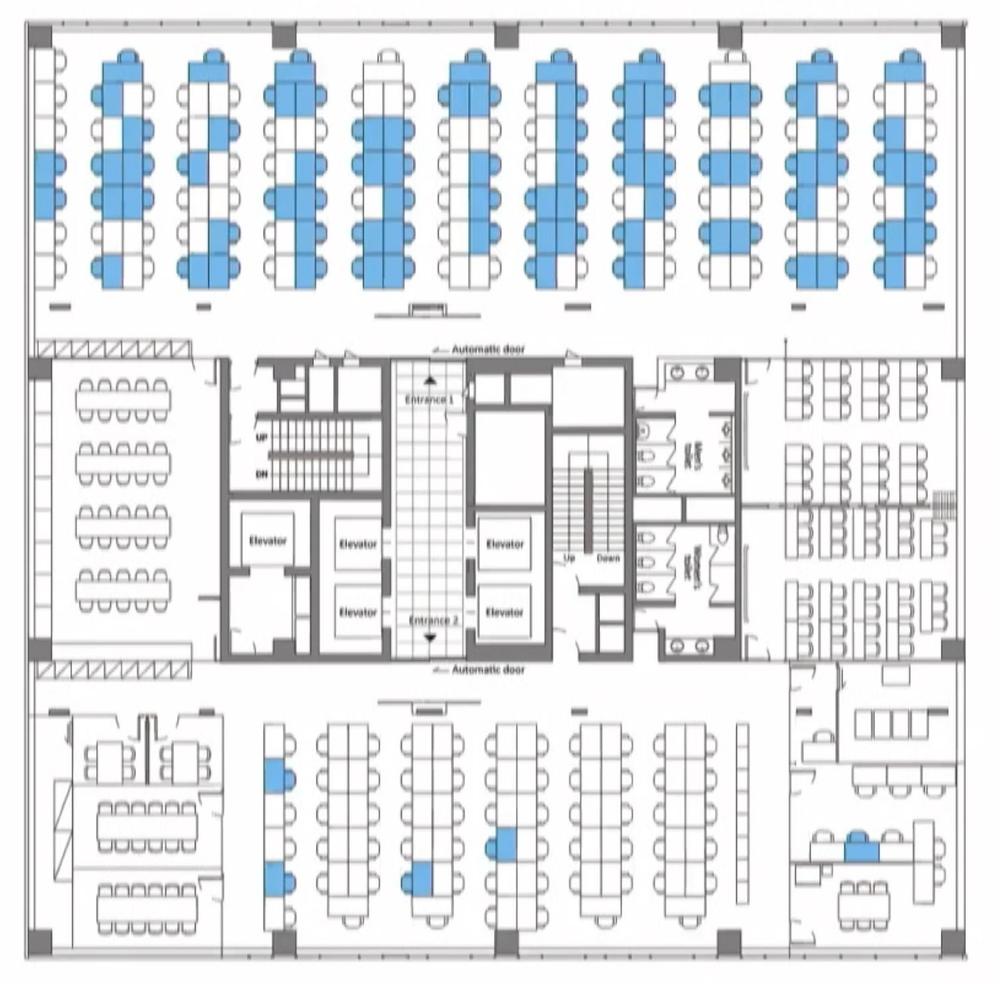 Various interventions can be used to reduce the aerosol risk

[Our comment: if you inactivate the viruses in aerosols before they have a chance to settle, you eliminate re-aerosolization before it can occur.]

The combination of all these interventions greatly reduces transmission risk.

Q: On the origins of the 5 micron cutoff, where did this come from?

A: A researcher looked into this and couldn't find a reasonable explanation. This value begins to appear in WHO and CDC documents in the 1990s where sometimes there are and sometimes there aren't citations. However, the citations don't actually mention a 5 micron cutoff. It became embedded as a myth and is being tracked down in conjunction with medical historians.

Q: Elaborating on the situations that are aerosol-generating, has there been a systematic attempt to evaluate the various settings that generate a large amount of aerosols?

A: We know that talking louder releases more aerosols, but there is little information about procedures that generate aerosols since we cannot observe this without aerosol-specific instrumentation to measure this.

Q: What about charge or pH of the aerosols? How might this impact interaction with electromagnetic fields?

A: I think charge could play a role, but not how big the role is. A 10% difference was found in one experiment we did. I don't expect pH to play a role.

Q: Are face shields useful if we have small aerosolized particles?

A: Face shields can stop the large ballistic droplets, but they will not impede aerosols. However, the aerosols generated by a person wearing a shield could possibly be diverted, reducing spread.

Q: Can you speak to the 15-minute time for infection and how that connects to infectious dose.

A: We don't know where this number came from, but we had to have some number, just like we had the 6 ft number. We don't actually know exactly what the dose-response curve looks like or what the infectious dose is for SARS-CoV-2. We had to pick a number that seems reasonable.

Next: Size characteristics of particles generated by people (8/36)

Previous: Importance of Understanding the Role of Airborne Transmission in COVID-19 (5/36)

Linsey Marr is the Charles P. Lunsford Professor of Civil and Environmental Engineering at Virginia Tech. Her research group applies interdisciplinary approaches to study pollutants in indoor and outdoor air. She is especially interested in emerging or non-traditional aerosols such as engineered nanomaterials and viral pathogens. Her research on the airborne transmission of infectious disease has focused on influenza, Ebola virus disease, and Legionnaire’s disease. Dr. Marr is a recipient of an NSF CAREER award and an NIH New Innovator award. In 2018, she was named a Fellow of the International Society of Indoor Air Quality and Climate. She is an Associate Editor of Microbiome and also serves on the editorial advisory boards of Aerosol Science & Technology, Environmental Science: Processes & Impacts, and Environmental Science & Technology Letters. She is a member of the National Academies’ Board on Environmental Science and Toxicology and recently served on the committee on Grand Challenges in Environmental Engineering for the 21st Century. Dr. Marr received a B.S. in Engineering Science from Harvard College and a Ph.D. in Civil and Environmental Engineering from the University of California at Berkeley and completed her post-doctoral training in Earth, Atmospheric, and Planetary Sciences at the Massachusetts Institute of Technology.